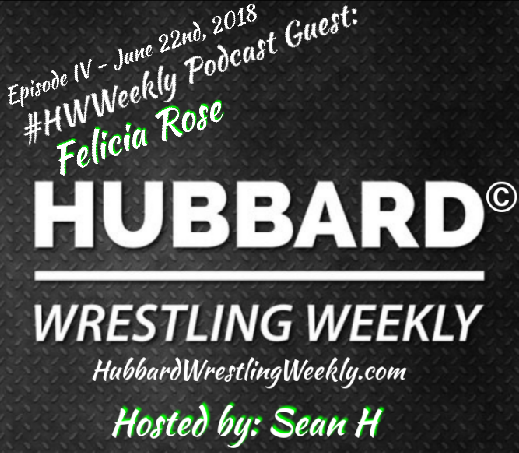 When you site 2 late-great legends like former WWE Intercontinental Champion & WCW World Heavyweight Champion “Ravishing” Rick Rude and manager of legendary icons like Randy “Macho Man” Savage, Booker T (Harlem Heat), and Ted Dibiase, Sensation Sherri Martel you better be really good! Fortunately for this rising star who makes a difference as a pro wrestling manager, is well on her way to being one of the best.Felicia Rose sat down with Hubbard Wrestling Weekly and gave an all-access interview about how she originally got noticed as a fan at NXT Takeover Brooklyn, became a manager, and is now on the doorstep of superstardom. From controversial posters, to her take on the sexualization of women in the pro wrestling industry, all the way to putting her own swaggy stamp on the Women’s Revolution, this woman is blazing her own path and is proud of it. Click play and take a listen as Ms. Rose breaks it down for you. This is week four of the HubbardWrestlingWeekly.com podcast!
Special Guest: Felicia Rose (Twitter:) @FeliciaRose
HWWeekly Website/Podcast Founder: Sean Hubbard
Web Developer/HWWeekly Lead Consultant: Alex@haascrea.com
**All content of Hubbard Wrestling Weekly Podcast has been produced by and is the exclusive property of HubbbardWrestlingWeekly©**