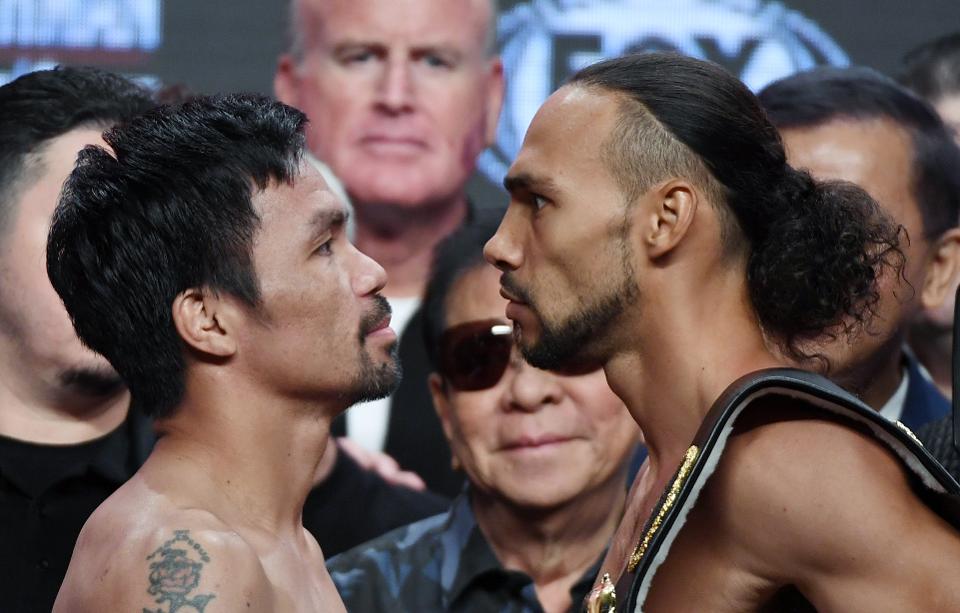 Live from the MGM Grand Garden Arena in Las Vegas, Nevada undefeated WBA Welterweight Champion of the World Keith ‘One Time’ Thurman and the only 8-division World Champion in history Manny ‘PacMan’ Pacquiao put on a great performance and definitely made the fight live up to the months of hype. The fight delivered in every sense of the word, as it was action packed and exciting from the opening bell, through the duration of the fight, and through it’s conclusion live on Fite TV and Fox Pay-Per-View. 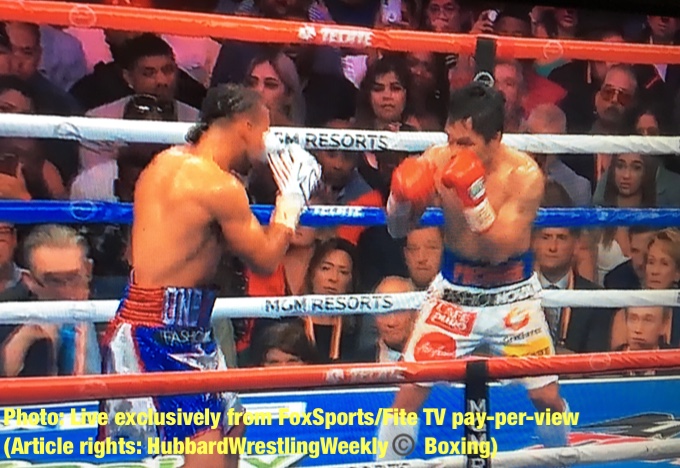 This fight was presented to the viewing public as youth vs. experience, and from the start, the PacMan showed the world that the 40-year old future hall of famer’s experience is priceless shocking the world with an early first round knockdown of his youthful championship opponent. The MGM Grand crowd erupted as this writer is sure millions of fans watching on Fite TV/Fox Pay-Per-View did as well when Pacquiao caught Thurman with a sharp straight right hand to the chin with :25 seconds left in the round. Manny surprisingly dropping Thurman to the canvas gave Manny an early 10-8 scorecard lead after the first three minutes of Welterweight World title action.

As the fight progressed, Manny continued to use speed and effective counter-punching to win the first half of the fight in this writer’s opinion. As the middle rounds commenced, Thurman had a bloody nose, seemed to not have an answer for his hall of fame opponent, and was in more trouble than he’d ever been in his career.  Thurman would however show the heart of a undefeated champion, coming on strong in the 7th, 8th and 9th rounds, catching Pacquiao with some good shots winning these rounds and making the fight a bit closer. Thurman made some adjustments during the middle rounds and  reminded the boxing world why he is the man who entered this fight as the undefeated WBA (Super) Welterweight Champion.

The fight would go into the 10th round seemingly with Manny Pacquiao ahead in the fight. PacMan had Thurman on the run with what some thought might have been a head butt, but after a Fox/Fite TV pay-per-view replay, viewers saw it was a very good body shot that led to Thurman taking his own mouth piece out as he backed away from Pacquiao. In round 11, Thurman would have arguably his best round of the fight, staggering Manny several times, especially with a vicious straight right hand to the face.  The stage was set for an epic 12th round to determine who the WBA Welterweight Champion of the World would be. The fighters touched gloves in respect and the final 3 minutes of this strongly contested contest would go forth. It seemed to this writer that Thurman might need a knockout to win, though you can never be too sure about how the judges would score the fight, so as the 12th round played out, both fighters fought toe to toe. Both men fought believing the outcome was still in doubt which led to great action in the ring that brought the MGM Grand crowd to it’s feet. The fight ended with a hug between the two combatants and both thinking they were victorious.

When the final scorecards were read by legendary ring announcer Jimmy Lennon, Jr, the results were as follows: