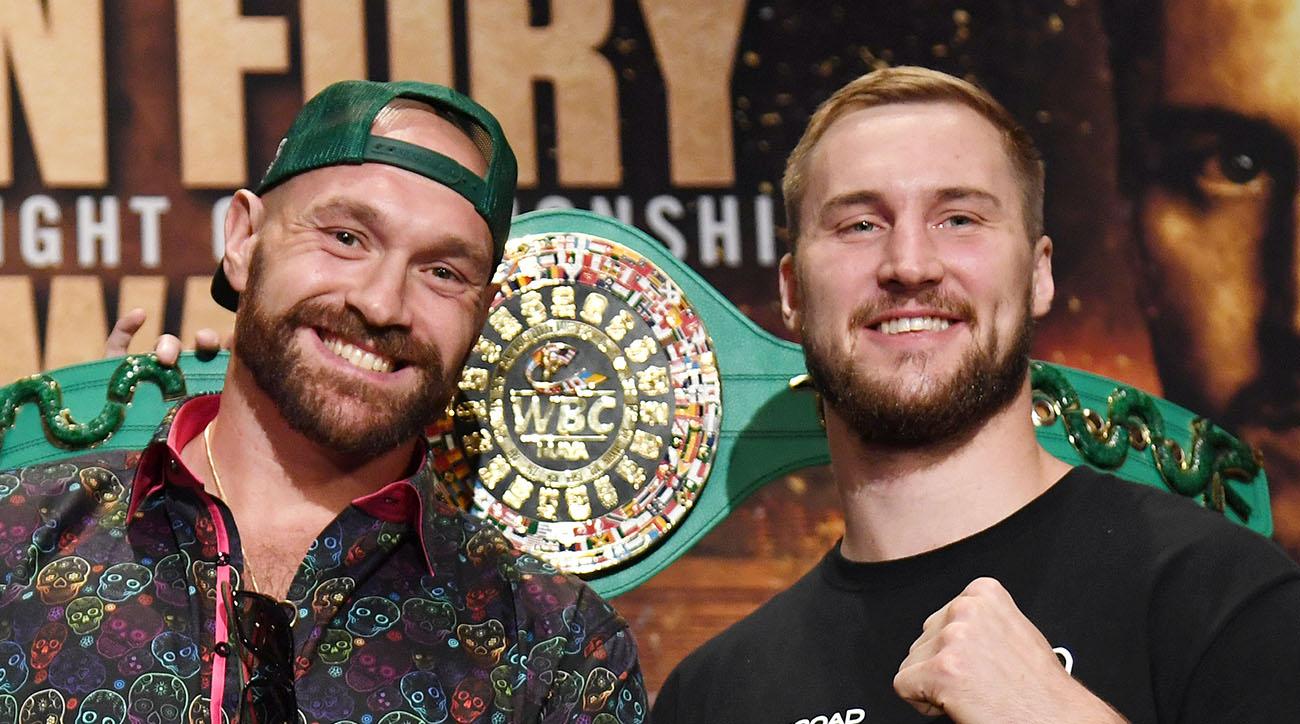 1:15am EST Live from the TMobile Arena in Las Vegas, Nevada, seen on Fite TV, ESPN+,and presented by Top Rank Boxing… Lineal Heavyweight Champion of the World Tyson Fury, who is seeking an epic rematch with WBC World Champion Deontay Wilder next year, defended his title and undefeated record against another undefeated fighter, the WBA European Champion Otto Wallin.

On Mexican Independence Day Weekend (historically a date on the calendar for big time boxing events), wearing a sombrero and the colors of the Mexican flag, the ‘Gypsy King’ put on a show during his ring entrance as he continues to build his brand and popularity as one of the 2 most respected names in the heavyweight division.

After introductions by Jimmy Lennon, Jr and instructions by referee Tony Weeks, the fighters met in the middle of the ring. The first two rounds saw Wallin gain some confidence as the aggressor in the fight. Fury kept a safe distance with his jab and an occasional combination of right cross and uppercut.  Overall the first two rounds were even in this writer’s view.

Concern would arrive in the Fury corner in round three, as blood began to stream down the Champion’s face (from above the right eye) from a clean left hand from Wallin.  As round four and five commenced, Fury was clearly bothered by the blood streaming down and instantly the fans and announcers began to build a sense of urgency as the cut was quite serious (the first cut of this nature in Fury’s career since 2010). The 30 to 1 underdog challenger’s confidence continued to grow as Fury wiped blood from his face as now it was clear the Lineal title was indeed in jeopardy at this stage in the fight.

In round six referee Tony Weeks had the doctor take a look at Fury’s eye. This was truly an intense moment because since it was deemed the cut was caused by a punch, if the doctor stopped the fight, Wallin would be the new champion. The doctor would let the fight continue, however and almost immediately Fury picked up the pace, perhaps with a sense of urgency due to the cut.  As the round came to close, Wallin did what seemed to be a dirty move by pawing/thumbing at the champion’s cut on the break.   In rounds 7 through 9 Tyson continued to pick up his punching pace connecting with some big shots while the challenger seemed to begin running out of gas, as he was driven by the force of the punches into the ropes, and was in danger of being knocked out in the 9th.  At the stage of the contest, it was clear the champ was now the aggressor in the fight, though dealing with the continued blood flow from his right eyebrow.  Round 10 saw the Lineal Champion start with a vicious combination of punches, while Otto continued to backpedal and slump against the ropes in exhaustion. Wallin would escape the 10th round…. Barely!

The championship rounds were upon us, and with that came more blood from the eye and massive combinations of cross, uppercut and hook from the champion. As the fight came to its conclusion, Wallin seemed to be completely out of energy and Fury looked to be well on his way to a decision victory despite the cut that plagued him since round three.  Then, all of a sudden, Wallin got a second wind and had Fury holding on and clearly hurt.  Once again, the Lineal World title was in limbo, much to everyone’s surprise.  When the final bell rang Tyson Fury’s face was covered in blood, Otto Wallin was the void of all energy and the viewing public awaited the judges’ decision.

“Deontay Wilder, I want you next, bum!” @Tyson_Fury calls out @BronzeBomber after his victory 👀 pic.twitter.com/Kznky4WHEI