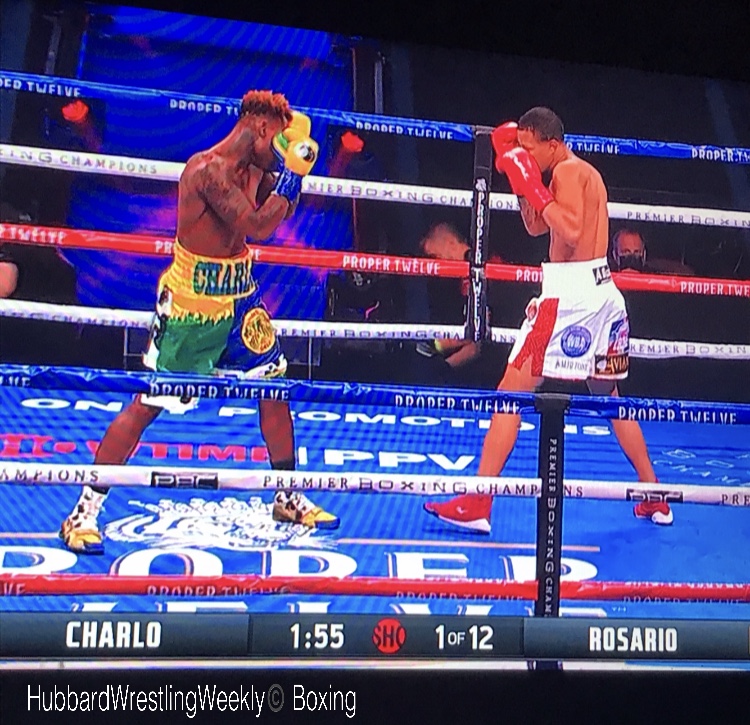 * In a unique and entertaining night of boxing,  The Charlo brothers put on a showcase on Showtime Pay-Per-View by respectively successfully defending and unifying championship gold in the Middleweight and 154-pound divisions.

* This PPV was like no other as both twins were the main event of two separate cards brought to the viewing public via Showtime Championship Boxing with a 30-minute intermission.  Six fights took place with five having world championships on the line. It was an entertaining evening of the sweet science showcasing two of the brightest stars in the business… WBC Middleweight Champion of the World Jermall Charlo and newly unified WBC, IBF and WBA World 154-pound Champion Jermall Charlo.

* In the featured contest of card 1 live from the Mohegan Sun arena in Connecticut USA was a WBC Middleweight title fight between undefeated champion Jermall Charlo defending his belt against 2-time former world title challenger Sergiy Derevyanchenko. During this hard fought contest Sergiy (as was the case when he challenged Gennadiy Golovkin in October 2019) had his moments, but as the fight progressed, Charlo asserted his dominance and would eventually win the right via unanimous decision 117-111, 116-112, 118-110.

*Round One saw the favored Charlo come out of the gates fast with a quick combination that put Rosario on the canvas early.  Rosario would recover to get out of the round.  As the fight progressed into the middle rounds both fighters had their moments with Jermell Charlo regaining dominance at the end of round six dropping Rosario with a crushing left hook that had the WBA/IBF champion staggering to his corner as the bell rang, thus giving Charlo his 2nd 10-8 round of the fight.

*The fight came to it’s conclusion in the 8th round as Jermell shockingly knocked out his opponent with a jab to Rosario’s body.  The now former two-belt holder went down in a heap, gasping for breath, and was counted out bringing victory the new unified champion Jermell Charlo.

* The Charlo Brothers and Showtime PPV put on one heck of a show and it was truly a success for the twins who now have a lot more gold around their waists.